Miami, FL, December 5, 2007 — John Thain, CEO of Merrill Lynch, has pledged to revamp the bank’s culture in response to insufficient management team co-operation that he believes could have contributed to the $8bn mortgage write down according to the Financial Times on December 3, 2007. 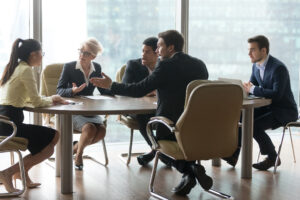 “Thain’s acknowledgement of culture and Management Dysfunction as a key contributor to poor business results is a courageous admission and other CEOs should be investigating it as well,” said Matthew Levy, CEO of Results Management Group. “The impact on corporate culture of poor executive level collaboration may be the single most underestimated cause of weak corporate performance for large and small companies alike.”

As companies across the nation prepare to execute next year’s strategies, addressing executive team dysfunction now is of the essence. Identifying the symptoms of Management Dysfunction is critical.

Software executive, Richard Kincaid of Vertical Computer Systems, recognized that his executive team meetings were power struggles with polarizing positions that caused a dangerous, self-perpetuating cycle. Levy uncovered other problem areas and set about teaching the executive team to redefine success, recognize each others strengths and styles, and gain velocity in goal attainment. Today Kincaid’s employees are united, excited and productive which accounts for the company’s increased sales, product line expansion and improved customer service.

2. Lack of shared commitment to the same compelling vision or strategy

3. Not hitting the numbers

4. Chronic frustration or resignation of executives

6. Frequent revisiting of decisions that were already made

8. Lack of accountability for the results they create and instead blame others.

“Too frequently, says Levy, “executives know their company struggles with such issues, but they are resigned to letting them persist because of an inability to see the way out of the mess,” explained Levy. “That’s why Thain’s remarks about Merrill Lynch are not only bold, but also smart.”

Start a conversation with us by calling (305)704-8990 and let’s explore what next level results look like for your company. Or shoot us an email and we will call you.

Matthew Levy is the Chief Catalyst and principal of RESULTS MANAGEMENT GROUP, LLC, a growth management consulting and executive coaching firm that dramatically shifts business results by: facilitating the creation of compelling visions and strategies, aligning executive and other management teams, developing an organizational capacity to manage execution and designing organizational environments that support the attainment of dramatically better results in any area.